His playing defies all categorization, and has earned him a place as a world class musician. He has already left his mark on contemporary jazz and given it new direction. The musical cosmopolitan Joachim Kühn sees himself as part of the jazz tradition, connected to European concert music and yet directly indebted to a contemporary musical language. He displays vehemence and sensibility, a virtuoso technique and imagination and an unfailing sense of dynamics. Be it in his interaction with long-time musical partners, in ever new and challenging musical constellations, or alone in his solo performances, Kühn always manages to make his concerts into a unique experience.

Even if some of the stations on his path from Leipzig, where Kühn was born in 1944, through his time in France and America may seem like diversions; his musical career not only displays cohesion, but also an inner logic that only becomes truly apparent with hindsight. Kühn, who already enjoyed a first-class classical training and was performing as a concert pianist at an early age, developed an enthusiasm for jazz under the influence of his older brother, clarinettist Rolf Kühn. Only 17 years old, he decided to become a jazz musician. His first trio, formed in 1964, played music that was way ahead of its time in its openness to free improvisation. In 1966, Joachim Kühn defected to West Germany after playing at a competition for young jazz musicians organised by Friedrich Gulda. In the same year, he performed with his brother at the Berliner Jazztage and at the Newport Jazz Festival. Directly after the successful US concert, Bob Thiele produced an album for Impulse with the dream line-up of the Kühn brothers and Coltrane-bassist Jimmy Garrison.

Joachim moved to Paris in 1968, where he played with such stylistically diverse musicians as Gato Barbieri, Don Cherry, Michel Portal, Slide Hampton and Phil Woods. In the early seventies, he became intensely involved with electric keyboards. Yet, he was always working in an acoustic context along with his work in (electric) bands like Jean-Luc Ponty or Association P.C. His trio with bassist Jean-François Jenny-Clark and drummer Daniel Humair dates back to these early Paris days.

In the second half of the seventies, Joachim Kühn immersed himself in the West-Coast fusion scene where he played with musicians like Alphonse Mouzon, Billy Cobham, Eddie Gomez and Michael Brecker. Even a saxophone player like Joe Henderson did not want to record his album „Black Narcissus“ without Kühn. After a short stint in New York, the pianist then moved to Hamburg at the beginning of the 1980’s.

This time-period saw the beginning of his concentration on the acoustic piano. In 1985, back in Paris, he reactivated the trio with Jean-François Jenny-Clark and Daniel Humair, a band that counted internationally as one of the leading piano trios, until the tragic early death of J.-F. Jenny-Clark in 1998. A (lasting) collaboration with studio-electronics specialist Walter Quintus at the mixing board resulted in the music for the ballet „Dark“ for choreographer Carolyn Carlson, the CD „Get Up Early“ and music for a piece of the same name for the Tanz-Forum Cologne. In 1997, Joachim Kühn composed and played the music for „Citizen Kane“, also a dance piece by Joachim Ulrich for the Tanz-Forum Cologne.

In 1990, in the first few months following the collapse of the Berlin Wall Joachim Kühn played in East Germany again, for the first time in 24 years. The year 1991 saw the realization of two celebrated large projects: a production of the trio Kühn/Humair/Jenny-Clark with the WDR big band, as well as an all-star band featuring (among others) Rolf Kühn, Randy Brecker, Palle Mikkelborg, Albert Mangelsdorff, Joe Lovano and Christof Lauer. In the same year, the pianist finished a commission for the festival in Grenoble. Among the many recordings by Joachim Kühn in the nineties, we find albums like „Thinking Jazz“ with the singer Eartha Kitt, as well as the solo album „Famous Melodies“ on which the pianist surprised his audience with his new treatments of melodies from the repertoire of German popular music. In 1995 his French/Swiss/German trio recorded the CD „Dreigroschenoper“ with original, jazz-inspired interpretations of Kurt Weill¹s music, a music that had already been part of the repertoire of his first 1960’s Est German trio.

Joachim’s family collaboration has never broken off since the legendary 1960’s cross-boarder performances in East German concert halls with Rolf Kühn ­ then already living in West Germany. The two brothers can be heard on numerous albums: the first class clarinet player and the exceptional pianist. The family portfolio ranges from the re-release titled „For Two
Brothers“ (1997) to the duo album „Love Stories“ (2004).

One of the large formations that Kühn works very closely with is the NDR radio big band, a collaboration that has resulted in a number of ambitious projects. In 1994 the project ³Europeana² arranged and directed by Michael Gibbs for Kühn with the NDR Radio Philharmonic and prominent guest soloists, placed the pianist in the midst of a great manifesto for a European jazz music. (CD „Europeana“ 1995 on ACT, re-released as ACT SACD 9804-2 in 2006)

June 1996 saw the first meeting between Joachim Kühn and Ornette Coleman. The free jazz icon had invited Kühn to a duo concert. The sensational and enthusiastically welcomed performance at the Arena di Verona was followed by a concert in front of a passionate audience at the Leipziger Jazz Tage, a live recording of which was released as the album „Colors“. Since this time, Kühn has worked repeatedly with Ornette, as a duo as well as a member of the alto-player¹s bands, performing in large concert halls, as well as at endless private sessions at Ornette¹s studio in New York.

Since the nineties, and not least due to Ornette Colman¹s encouragement, Kühn has started involving himself again intensely with the music he grew up with, and that influenced him strongly in his younger years: European music, especially the music of Johann Sebastian Bach. In 1998 he began a collaboration that initially seemed unusually courageous and daring to both parties, and later turned out to be extremely successful: His projects with the Leipzig Thomaner-Choir directed by Georg Christoph Biller. Initially
conceived for the Leipziger Jazztage, the project „Bach Now ­ Motets and improvisation“ performed in the Nikolaikirche and Thomaskirche, both former working-places of Bach in Leipzig, as well as in large concert halls.

The death of J.-F. Jenny-Clark left a gap that could not be filled, so Kühn developed new trio concepts that he put into practice with American and European musicians. The pianist also started adding the alto sax to his performances. Parallel to his US-trio with bassist Scott Colley or Charnett Moffett and drummer Horacio „El Negro“ Hernandez (the results are recorded
on the album „Universal Time“, 2001), he created the European Trio with Jean-Paul Celea on bass and Wolfgang Reisinger on drums the (the 2005 CD „Poison“ focuses on the theme of hallucinogenic drugs in jazz and rock songs).

In the second half of the nineties, Kühn began working with the West African percussionist Moussa Sissoko. The CD „Ala Tamala“ (1998) adds Walter Quintus on the soundboard to form another creative trio. Transcending world-music clichés, Joachim Kühn has always been interested in expanding sound, and in meeting musicians from all parts of the world. In this context, it is no big surprise that even the Arabian oud and a grand piano blend beautifully, even though they were originally created for very different tonal systems. Kühn bridges the cultural divide together with oud virtuoso Rabih Abou Khalil and percussionist Jarrod Chagwin (2005 CD „Journey to the Centre of an Egg“). Moroccan Majid Bekkas, who sings and plays the bass-like African lute called guembri, and Spanish drummer Ramon Lopez, are Kühn¹s partners in his latest trio (CD „Kalimba“ ACT 9456-2, 2007). In intense interaction, the three musicians have developed a sound that seems as far removed from the conventional piano trio format as Ornette Coleman is from traditional jazz, and yet this new band is a continuation of this history in a world of cultures moving closer to each other despite the ongoing conflicts.

Joachim Kühn has reached a stage of maturity, and remains nonetheless open for new encounters. Technique has long ceased to be a challenge. One of the great piano virtuosos of our time, he is no more interested in showing his chops. His focus is on communicating the depth of emotional experience. Joachim Kühn“s work is centred on the pure quality of the music.

Joachim Kühn is a German pianist of world standing, a stand-alone figure in European jazz. In his new trio, joined by players from a much younger generation, he shows absolutely no signs either of slackening or of surrendering to his age – he is in his early seventies. Kühn’s musical curiosity is as boundless as it always was, his urge to keep creating new music is undimmed. It is as if for him to stand still would be to go backwards. He lives in a finca in a remote part of Ibiza, overlooking the Mediterranean, where he is to be found either at the piano – he plays every day – or dipping into his vast library of music. He has over 1,500 CDs, ranging from old recordings to up-to-the-minute releases.

For “Beauty & Truth” he and producer Siggi Loch have made a selection of new and old pieces, reaching out into unfamiliar repertoire, and recorded them with the new trio. “These are strong melodies which can be given a really distinctive shape” he explains. They are also pieces which in their different ways are of personal significance to him. “Kattorna”, the Krzysztof Komeda composition, is a case in point: “I was present at the recording sessions for the album “Astigmatic” in Warsaw in 1965, and listened in. The memory of having heard this piece came flooding back to me.” Kühn is also to be heard for the first time playing the music of The Doors. There is also a reggae-dub track from Stand High Patrol on the album. It was inevitable that Ornette Coleman, who died in June 2015, and played exclusively with Kühn from 1996 to 2000 would also figure prominently. The title track “Beauty And Truth” is a miniature for solo piano. It serves as a prologue to the album, both setting its tone and defining its concept, which is to get straight to the essence of what each composition is about, to discover its intrinsic truth, and to elicit the authentic beauty from it.

In these twelve pieces a new and different Joachim Kühn can be heard: his piano playing is powerful and clear, and musically he has a way of going straight to the heart of the matter. He is always solidly grounded in the groove, he plays with unconfined joy – and with buckets of soul too. Kühn is palpably excited by his new trio: “After several years, I have now returned to the classic piano trio format. The trio with Jean-François Jenny-Clark and Daniel Humair was in existence for 30 years. It was the trio of my life. The depth and the intensity we found were incredible. In Eric and Chris I have found a new dream team. It is very inspiring to play with them.” 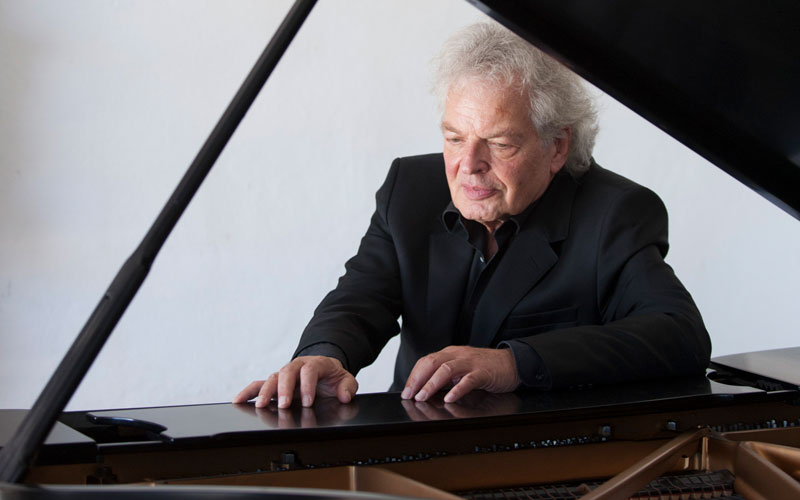 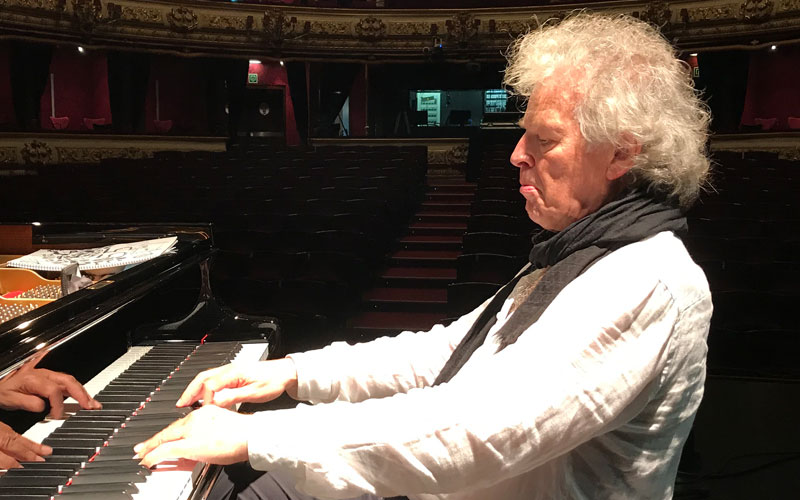 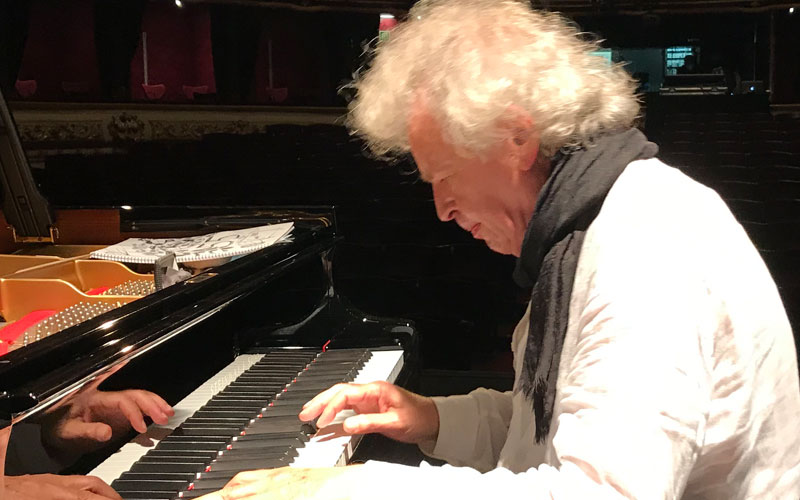 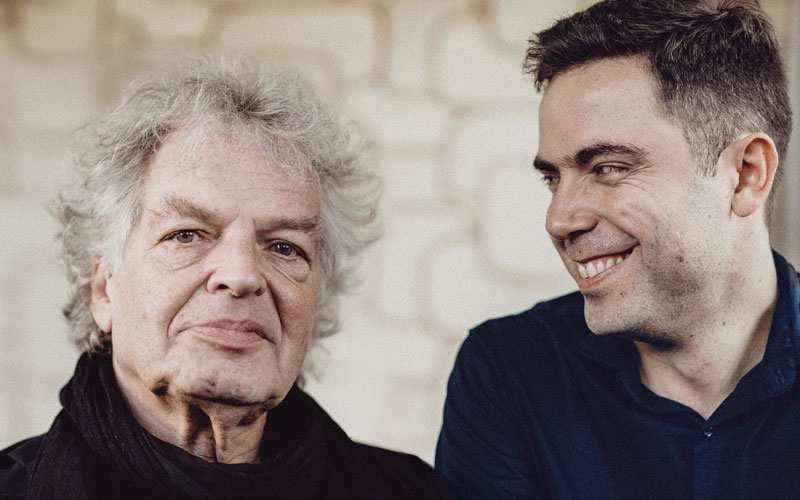 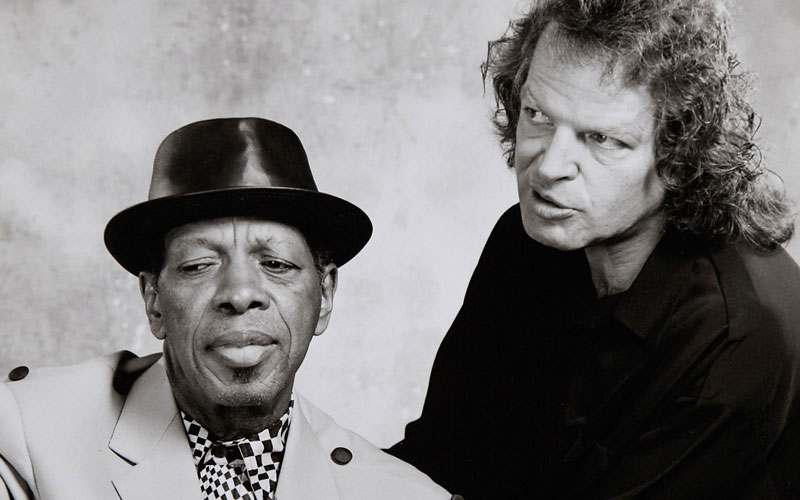 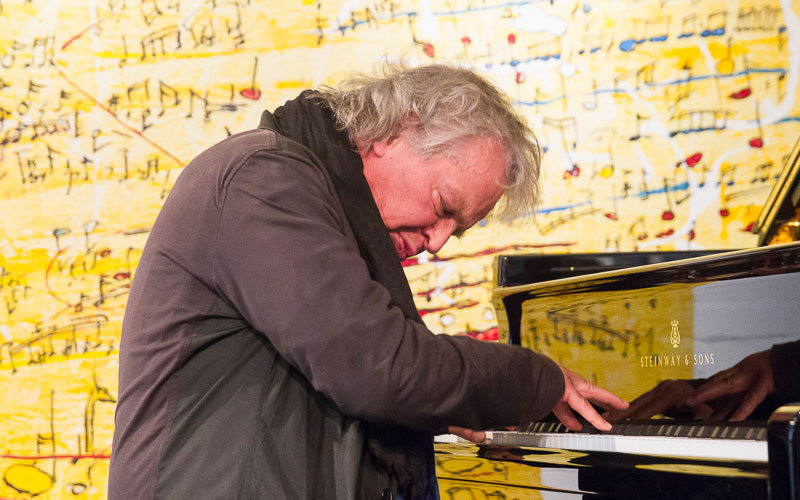 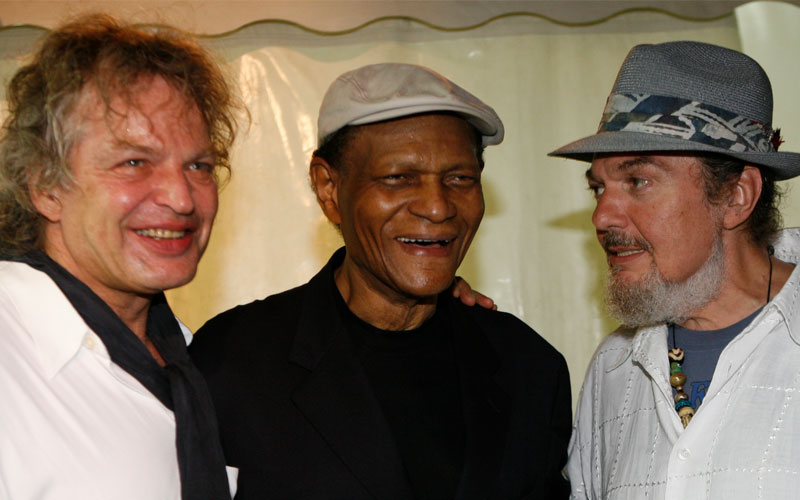 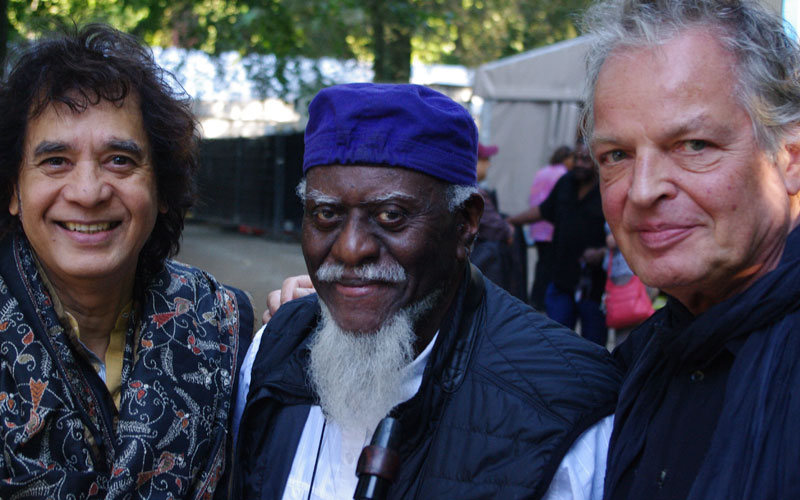 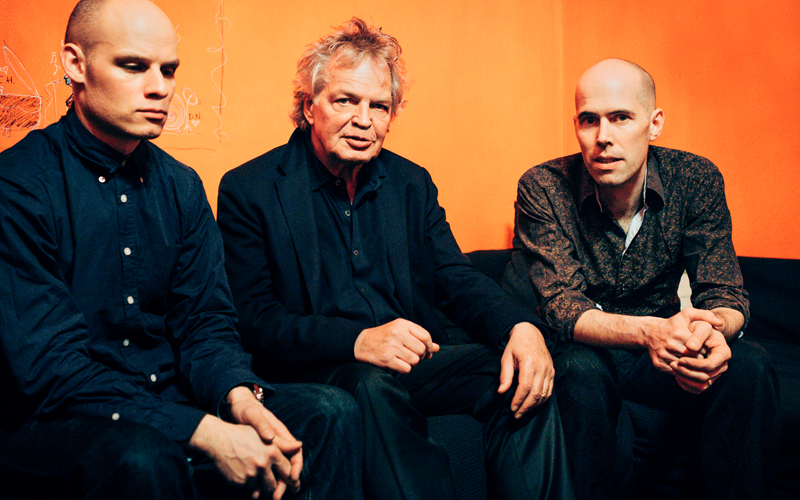 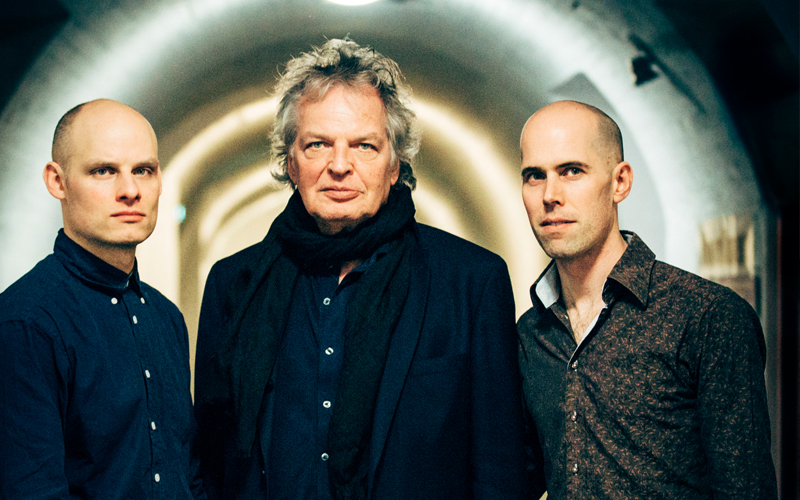 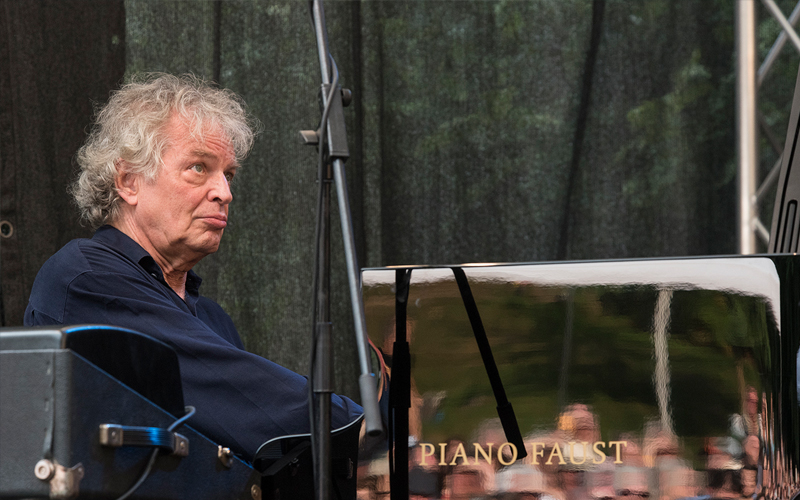 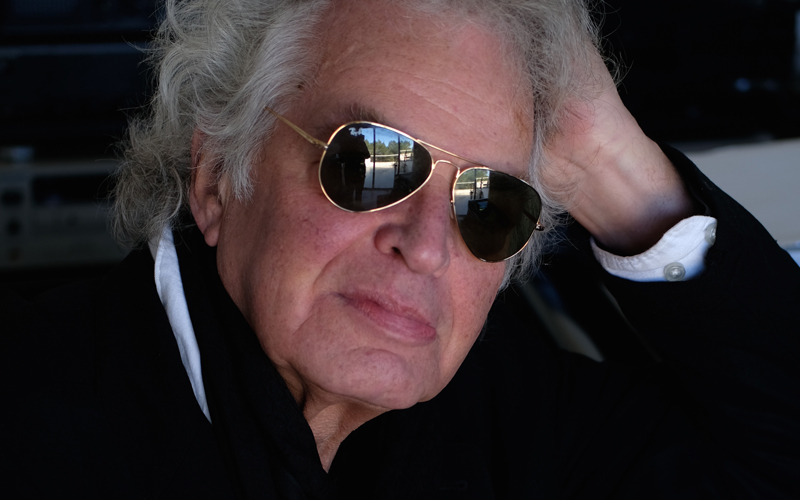 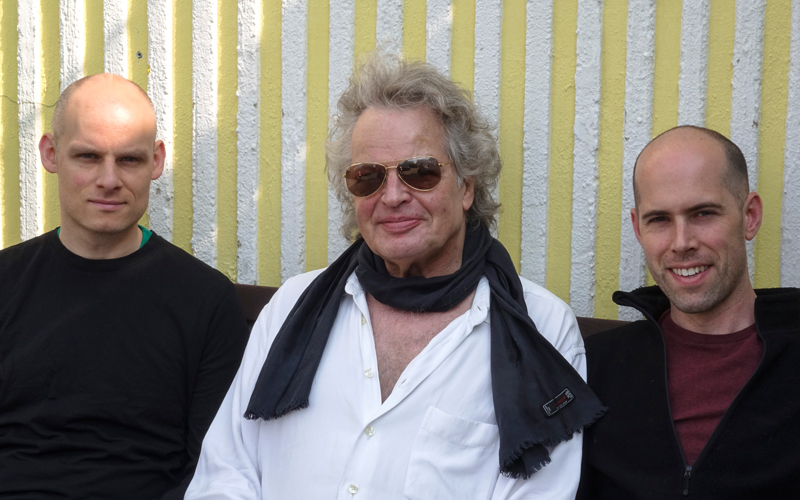