Cæcilie Norby has been celebrated by fans, critics and many of the world’s greatest musicians. In Europe, where she’s still one of the best selling jazz artists, she was one of the very first who contributed to bridge the gap between Jazz and the young traditionally rock oriented audiences. She has released 4 of her solo albums on the prestigious BLUE NOTE Records, received awards and selling thousands of albums in Europe, US, Japan and South Africa.

In 2015 she started with the German ACT label. Her first released  album was with Lars Danielsson   „Just the two of us“.

On January 25, 2019, Cæcilie Norby publishes the 11th album in her own name, titled „Sisters in Jazz“. This is an exciting collaboration with female instrumentalists from the European jazz elite, each of which has established themselves as leading equilibrist on their instruments of choice. A long tour across Europe lies in front of the ladies for the rest of 2019 and 2020.

Look at the history of jazz, and it is all…frankly…a bit male. There have, of course, always been very prominent female jazz singers, but female instrumentalists and composers such as Jutta Hipp, Carla Bley or Geri Allen are few and far between. Today, even though men are still in the majority, female emancipation in jazz has definitely happened. Women are increasingly raising their profile and their visibility, and really making their presence felt. And the album „Sisters in Jazz“ is proof positive of just how good a thing that is.

Jazz is feminine too. In fact, this short sentence serves as a very apt description of Cæcilie Norby’s new album. The Danish singer has never been afraid to explore new avenues artistically. Her unique and versatile singing style has enabled her to collaborate with top instrumentalist on the International Jazz Scene. Most of whom have been male! So when producer Siggi Loch presented her with the idea of an all female band, celebrating women in Jazz, she was delighted. She says: „There is no doubt that strong, compentent female musicians are underrepresented on the music scene- nor is there any doubt that they excist!!“

With Rita Marcotulli (piano), Nicole Johänntgen (saxophone), Hildegunn Øiseth (trumpet), Lisa Wulff (double bass) and Dorota Piotrowska (drums), Loch has placed a band of outstanding European instrumentalists alongside the singer. After a Jazz at Berlin Philharmonic concert which he curated in November 2017 under the title „Sisters in Jazz“ (with Terri Lyne Carrington as leader), he has taken the idea of the female band further, and provided Norby with strong female musicians for a studio album.

All the compositions were written by women, by jazz pioneers such as Betty Carter („Droppin‘ Things“), Abbey Lincoln („Love Has Gone Away“) and Nina Simone (“Do I Move You?”) or the queen of the thoughtful singer-songwriters herself, Joni Mitchell („Big Yellow Taxi“ and „Man From Mars“). Plus two songs by Norby, and one by Rita Marcotulli.

„This album celebrates women in jazz,” says Norby. “That’s why it was important to me that there were women artists who had a strong influence on my life and artistic development. Abbey Lincoln’s and Nina Simone’s songs don’t just have great melodies, but also great lyrics. I wanted to have lyrics that would fit with my age and life experience. “Bonnie Raitt’s song „All At Once“, for example, is a kind of love song, but it’s also about broken hearts and families that are falling apart. These are grown-up, mature lyrics full of experience, not the usual jazz love songs.“

The countries of origin of the musicians are very diverse, as are their artistic influences. „Sisters in Jazz“ demonstrates the power of improvised music and its ability to bring people and even nationalities together. The music on the album encaptures the scintillating piano solos by Italian Rita Marcotulli, trumpet lines with a very unique sound by Norwegian Hildegunn Øiseth, the saxophone sound of the Swiss player Nicole Johänntgen which is very deeply rooted in tradition – here together with a powerful, grooving rhythm section with Lisa Wulff, from Northern Germany and Dorota Piotrowska, who originally hails from Poland. The percussionist Marilyn Mazur joins as a guest on four pieces. Whether they’re playing easy swing, or cool, or elegiac-nordic, or hard-hitting, or getting drenched in the blues, the musical range of “Sisters in Jazz is impressively wide.

The age range between the youngest musician in the line-up and the oldest is 30 years. „Sisters in Jazz“ thus refers to another factor that is of only peripheral importance in jazz: the age of the players. „That’s the great thing about jazz, borders like nationality, gender and age just disappear as soon as you start to make music.“

Jazz is music of strong personalities who communicate with each other, jazz is timeless and ageless, knows no national borders and should also completely overcome gender boundaries. Because when the recording light goes on in the studio, all discussions of gender are over: „As soon as you play, it’s all about listening and interacting. Then, it’s only the musical personality that counts“, says Norby. There is only one conclusion: jazz is not male, jazz is not female, but it is above all one thing: human.

Cæcilie Norby & Lars Danielsson
just the two of us

The sound of a bass starts things off – tender, dreamy and resonant. Only a player like Lars Danielsson can introduce a melody quite as magically as this. Then Cæcilie Norby joins in and sings Joni Mitchell’s eternal ballad “Both Sides Now” in her own irresistably sensuous way, entrenched in blues and utterly charming. With the very first note Norby and Danielsson take their listener on a journey
into their private music universe, which leaves no-one unmoved.

For many years Norby and Danielsson are a married couple but musically they went their separate paths for a long time: Norby was the pre-eminent funk and jazz singer in Denmark, until she took herself off to America, long before other Scandinavian singers followed her example. She became the first European female artist to be signed to the Blue Note label, a move which led to working with global stars such as Mike Stern and Chick Corea. Lars Danielsson, from Sweden, also has a major international career to his name, working alongside the likes of Charles Lloyd and the Brecker Brothers; but over and above that, he has developed as an artist (and also as a producer) through being a long-standing member of the ACT label family, and is now regarded as one of the most significant European jazz musicians. Just recently Danielsson has received the prestigious ECHO Jazz 2015 as best bassist international in Germany.

Norby has also found her artistic home at ACT, where she has now been since 2011. Her husband was closely involved in the production of both of her albums for the label. In return, she brings her musical know-how into Danielsson’s productions, just like on the most recent album “Liberetto II”, released in 2014.

The two have now taken on another venture together, performing an intimate duet, “Just The Two Of Us.” Danielsson explains: “This was a major challenge. For a bassist, the voice is the most demanding of instruments with which to work in a duo. You have to proceed with extreme delicacy when it comes to intonation and pulse. It can only work with two people who know each other really well, and who have a sixth sense for the direction the music is taking. Cæcilie knows how to react instantly to my playing, I couldn’t have done this with anyone else.”

Apart from songs by Joni Mitchell, Leonard Cohen and the great Abbey Lincoln, these two play their own compositions. These range from songs that come from deep-set emotions, like “Sad Sunday,” to an arrangement for duo of Danielsson’s popular composition “Liberetto,” to which Danielsson has added a trademark extra section, “Cantabile.” The variety of expression that they achieve together, the sheer opulence of their musicality will amaze the listener.

The album runs the gamut from the more classical “Toccata” to the grooving feel-good song “And It’s Supposed To Be Love.” Norby and Danielsson take on the folksy nonchalance of the charming ballad “Cherry Tree”, and also get stuck into the melodramatic soul number “Wild Juju Child.” They range from the near-silence of the miniature “Wondrous Story” to the African highlife
spectacular “Wholly Earth.”

Danielsson bows and plucks the bass, but that is far from all he does: he plays cello, and reveals himself to be
a fine guitarist, and also deploys percussion instruments including marimba. Norby’s vocal contribution goes all the way from the tenderest pianissimo to a gutsy shout, and she also accompanies herself on percussion – utilising both the Nigerian udu and the sansula (thumb-piano).

Norby and Danielsson are virtuosos, they are experienced artists, they are soul-mates who trust each other. Expect some magic. 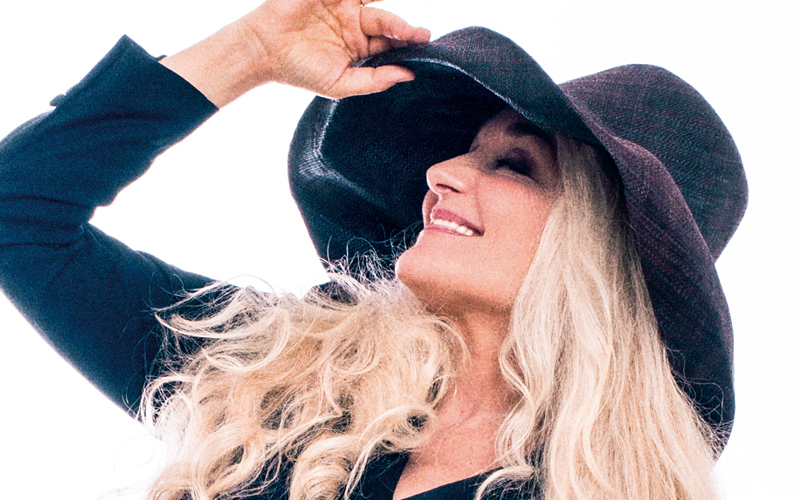 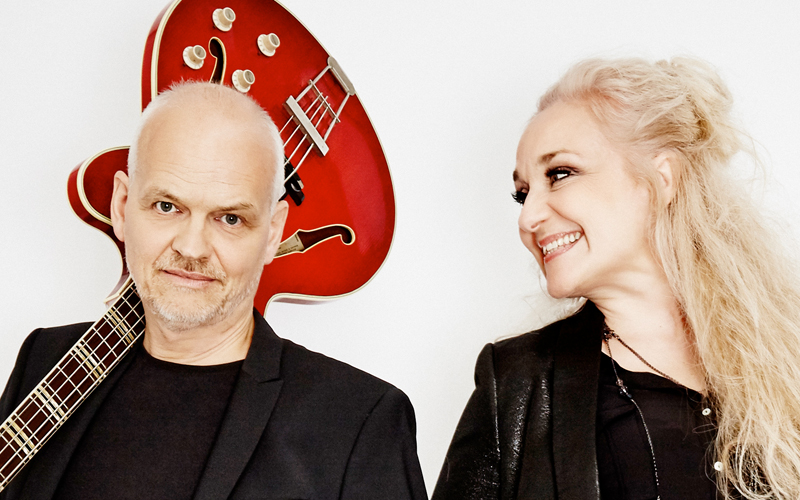 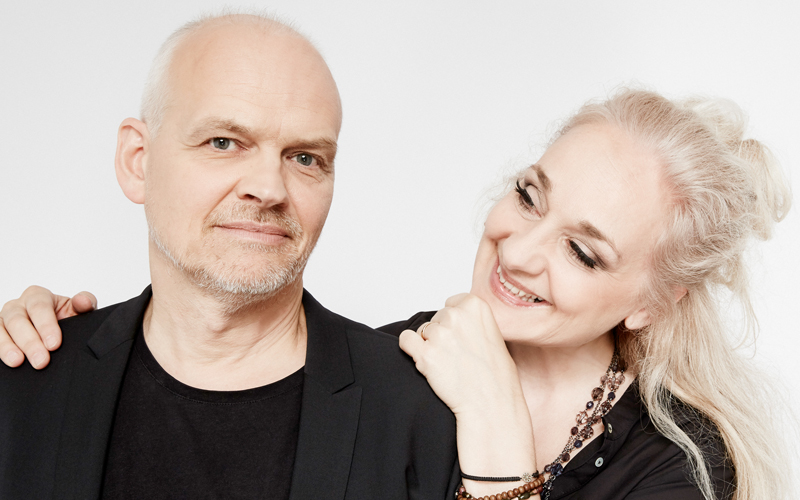